I’ve very excited that one of my favorite apps, LongScreen, is this week’s sponsor of markdmill.com.

If you’re anything like me, you frequently take screenshots of articles, tweets, images, SMS conversations, and anything else you want to save or share. The problem is, whatever you’re trying to capture is often longer than a single screenshot. For a long while, I searched for a solution and was never able to find something that was satisfactory–the worst apps were downright spammy and the best apps were designed for making Instagram collages, not displaying screenshots. LongScreen is as good at screenshots as those other apps were bad. In fact, I use it so often and love it so much that it’s now on my homescreen–yes, it is that good. The developer has thought through all the details and gotten them just right.

Look at the image above and compare it to the originals below: 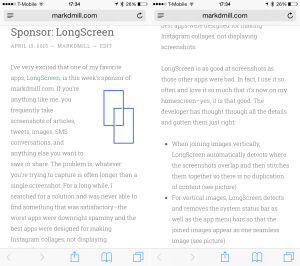 Notice how LongScreen cleaned up the status bar (hiding my embarrassingly low battery), stitched the images together seamlessly (even though one screenshot split a line of text), and removed the appropriate top and bottom menu bars. Absolutely beautiful–and it took me just four taps to do that. Powerful, but dead simple, LongScreen is a universal app for both iPhone and iPad. It has completely solved what was a routine headache for me and I cannot recommend it highly enough. It is just $2.99 on the App Store and absolutely worth it. Get it today and merge screenshots with ease!