My thanks to this week’s sponsor, World Time Widget, an app that puts timezones  in your Today View. Read my full review or why you’ll like it.

Far too much time and energy has been spent in the last days talking about whether or not the Apple Watch is “necessary.” Many of yesterday’s reviews, in fact, addressed this issue specifically. Consider just a few:

Do I really need another connected screen blinking, beeping and buzzing all day?

[M]any manufacturers have set sail with ambitious wearables; very few are bona fide successes. Most people aren’t even sure they need one.

The Title of Bloomberg’s review in fact was “You’ll Want One, but You Don’t Need One“:

So far, the biggest question about wearables—there are already plenty of products on the market—is really: Who needs one?

Its second task—making me feel that I need this thing on my wrist every day—well, I’m not quite sure it’s there yet. It’s still another screen, another distraction, another way to disconnect, as much as it is the opposite. The Apple Watch is cool, it’s beautiful, it’s powerful, and it’s easy to use. But it’s not essential. Not yet.

The question of necessity isn’t irrelevant to a review, as many people will be asking that question themselves. That question, however, actually prevents both reviewer and reader from understanding the true value of Apple Watch. Allow me to explain what I mean by sharing a story that is not a digression (even if it feels like it initially).

My wife and I were blessed beyond measure when, nearly 10 weeks ago, she gave birth to our son, Ian. 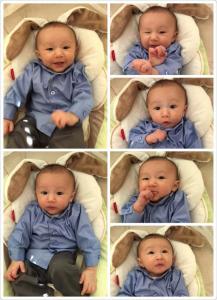 Between the joys and struggles of being first-time parents, we quickly discovered that Ian wanted to be held. Constantly. Never-endingly. Some babies eat, sleep, poop, and cry; Ian ate and pooped, but only slept if he was held and only cried if he wasn’t. The first weeks were exhausting as we took turns holding him and walking around our house. When I was at work, my wife was exhausted caring for him; when I returned, I held him while my wife slept. As a result, we barely saw each other (or anyone else!) for weeks.

Then, after about 6 weeks of this, we decided to get a baby swing. It was life-changing, and that is no understatement. The swing–Fisher Price’s SnugaBunny–is absolutely amazing, perhaps even a literal lifesaver (we recommend it highly if you’re in the market!). Ian loves the swing and the motion makes him happy (pics above are in the swing). We sleep better, since the rocking motion soothes him back to sleep if he wakes up. Ian eats better, since he’s better rested and has more energy. Our house is cleaner, as my wife can take time to do housework when Ian’s sleeping. A clean house and an easy way to keep Ian happy mean we can have friends over more often, making life richer. The best thing, though, is that my wife and I can actually spend time together again, and our love has grown. There is literally no facet of our life that has not been radically helped by the baby swing.

The Wrong and Right Questions

Why do I share this story? Because we almost missed these incredible benefits as we were asking the wrong question. Notice that we didn’t buy the baby swing before Ian was born, only 6 weeks later. We had thought it wasn’t worth it, that the rocking bassinet and bouncer we had would be good enough. Since finances are a bit tight,1 we focused on buying only necessary items.

That was a horrible decision, not because the baby swing was cheap but because the alternative was costly. We asked if we could get by without one–and so focused our attention on how to accomplish the same task in a different way. We saw that a baby swing duplicated the functionality of what we already had. After all, a baby swing basically does the same thing as a rocking bassinet, bouncer, and even our arms! There wasn’t reason to add a fourth gadget that was just slightly different from the functionality we already had.

But because we focused on whether a swing was necessary and whether it did the same thing as what we already had, we missed out on weeks of bliss. Better questions to consider would have been whether the new gadget offers unique benefits over what we already had, whether those benefits were worth the cost, and what was the cost of not having those unique benefits. Yes, a swing does basically the same thing as what we already had–but what it does uniquely different (automatic rocking!) is immensely valuable and worth every penny. The cost of not having one was immense. We should have gotten one sooner.

In my opinion, I don’t think we yet know how to answer these questions regarding Apple Watch. These kinds of questions are impossible to answer in a 15-minute hands-on session and are hard to answer even after one week with the device (one reason I’ll be do a week-by-week review for the first month). But if, as we evaluate Apple Watch, we ask the wrong question, we’ll focus on how the watch is similar to the phone. We’ll miss what makes it uniquely valuable, whether that value outweighs the cost and, perhaps most importantly, what the cost is of not having those unique benefits.

puts the timezones you choose in your Today Widget, so you can see them at a glance. If you deal with multiple timezones, it is the best and most convenient way to track timezones. Read my full review or why you’ll like it.

1. One reason why I run sponsorships on this site and enable you to support it when you shop on Amazon and iTunes.↩️